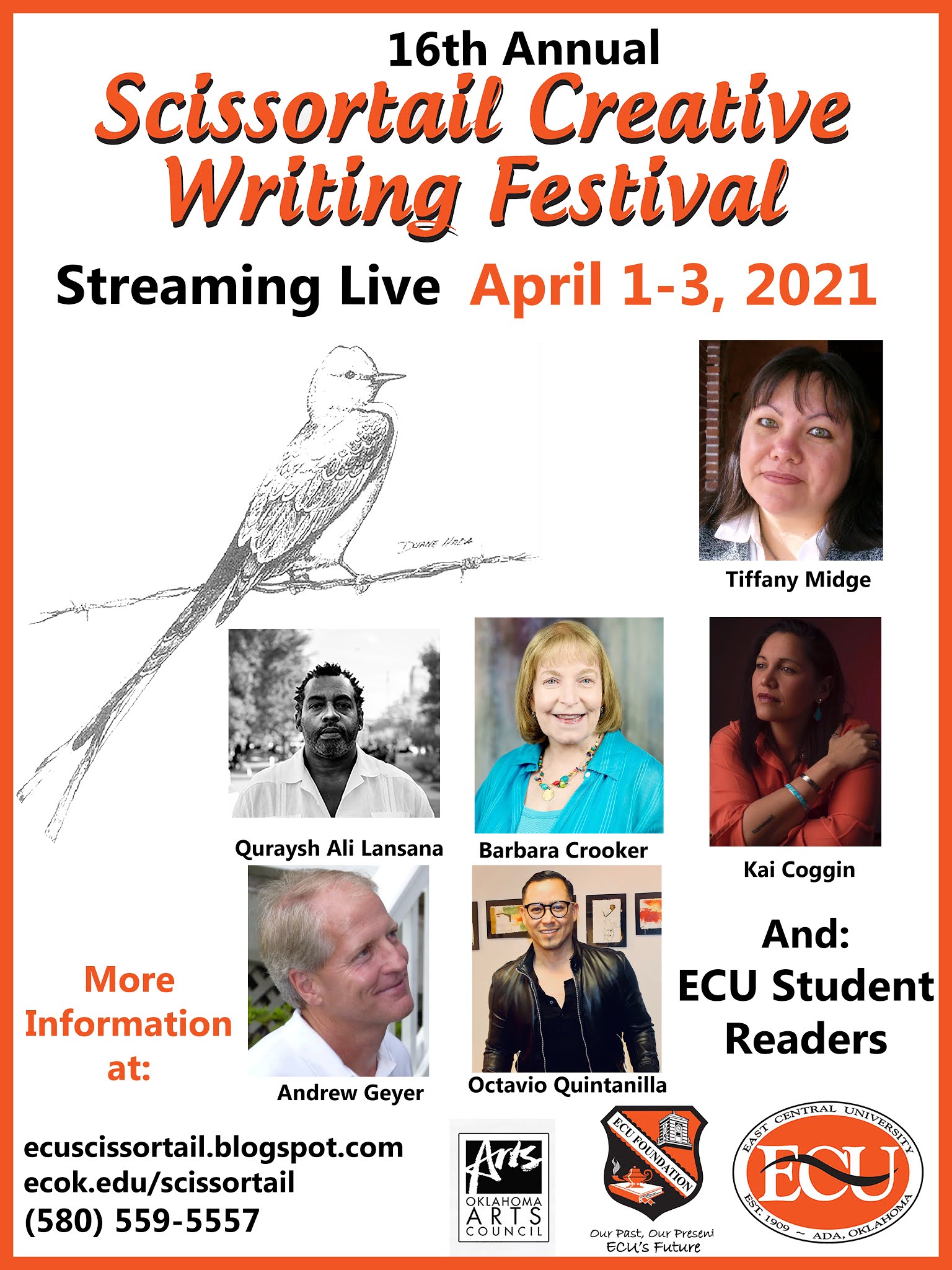 Posted by Steve Benton at 10:35 AM No comments:

Schedule of Live-stream Readings (all times are Central Time Zone)

When we are live, the stream should be the most recent video option to click on.

Kai Coggin is the author of three full-length poetry collections PERISCOPE HEART (Swimming with Elephants 2014), WINGSPAN (Golden Dragonfly Press 2016), and INCANDESCENT (Sibling Rivalry Press 2019), as well as a spoken word album SILHOUETTE (2017). She is a queer woman of color who thinks Black lives matter, a teaching artist in poetry with the Arkansas Arts Council, and the host of the longest running consecutive weekly open mic series in the country—Wednesday Night Poetry. Recently named “Best Poet in Arkansas” by the Arkansas Times, her fierce and powerful poetry has been nominated three times for The Pushcart Prize, as well as Bettering American Poetry 2015, and Best of the Net 2016 and 2018. Her poems have appeared or are forthcoming in Cultural Weekly, Entropy, NELLE, Sinister Wisdom, Calamus Journal, Lavender Review, Luna Luna, Blue Heron Review, Yes, Poetry and elsewhere. Coggin is Associate Editor at The Rise Up Review. She lives with her wife and their two adorable dogs in the valley of a small mountain in Hot Springs National Park, Arkansas.

Barbara Crooker is a poetry editor for Italian-Americana, and author of nine full-length books of poetry, with Some Glad Morning coming out in the Pitt Poetry Series in 2019. Her awards include the WB Yeats Society of New York Award, the Thomas Merton Poetry of the Sacred Award, and three Pennsylvania Council on the Arts Creative Writing Fellowships. Her work appears in a variety of literary journals and anthologies, including The Valparaiso Poetry Review, The Chariton Poetry Review, Green Mountains Review, Tar River Poetry Review, The Beloit Poetry Journal, The Hollins Critic, The Denver Quarterly, Smartish Pace, Gargoyle, Christianity and Literature, The American Poetry Journal, Dogwood, Zone 3, Passages North, Nimrod, Common Wealth: Contemporary Poets on Pennsylvania, The Bedford Introduction to Literature Nasty Women: An Unapologetic Anthology of Subversive Verse, and has been read on the ABC, the BBC, The Writer’s Almanac, and featured on Ted Kooser's American Life in Poetry.

Andrew Geyer’s ninth book, the story cycle Lesser Mountains (Lamar University Press, 2019), won a 2020 Independent Publisher Book Award (IPPY) for U.S. South - Best Regional Fiction. His other individually authored books are Dixie Fish, a novel; Siren Songs from the Heart of Austin, a story cycle; Meeting the Dead, a novel; and Whispers in Dust and Bone, a story cycle that won the silver medal for short fiction in the Foreword Magazine Book of the Year Awards and a Spur Award for short fiction from the Western Writers of America. He is the co-author, with Jerry Craven and Terry Dalrymple, of the hybrid story cycle Dancing on Barbed Wire. Geyer also co-authored Parallel Hours, an alternative history/sci fi novel; and Texas 5X5, another hybrid story cycle from which one of his stories won a second Spur Award for short fiction. He co-edited the composite anthology A Shared Voice with Tom Mack. A member of the Texas Institute of Letters and the South Carolina Academy of Authors Literary Hall of Fame, Geyer currently serves as English Department Chair at the University of South Carolina Aiken and Fiction Editor for Concho River Review.

Quraysh Ali Lansana is author of nine poetry books, three textbooks, three children's books, editor of eight anthologies, and coauthor of a book of pedagogy. He is a Fellow with the Tulsa Artist Fellowship, an adjunct professor for Oklahoma State University – Tulsa, and Curriculum Auditor for Tulsa Public Schools. He is a former faculty member of both the Writing Program of the School of the Art Institute of Chicago and the Drama Division of The Juilliard School. Lansana served as Director of the Gwendolyn Brooks Center for Black Literature and Creative Writing at Chicago State University from 2002-2011, where he was also Associate Professor of English/Creative Writing until 2014. Lansana is currently a Contributing Editor for Oklahoma Today magazine, and served as the Poetry Section Editor for Black Issues Book Review, as well as a Reading/Language Arts Editor for three of the largest educational publishing companies in the nation. He also worked as a Special Program Editor for Chicago Public Radio’s Every Other Hour series InVerse. Lansana was also an Assignment Desk Assistant for KWTV-9 in Oklahoma City and a News Director for KGOU Radio in Norman. Our Difficult Sunlight: A Guide to Poetry, Literacy & Social Justice in Classroom & Community (with Georgia A. Popoff) was published in March 2011 by Teachers & Writers Collaborative and was a 2012 NAACP Image Award nominee. His most recent books include the skin of dreams: new & collected poems, 1995-2018 (The Calliope Group, LLC); The Whiskey of Our Discontent: Gwendolyn Brooks as Conscience & Change Agent, w/Georgia A. Popoff (Haymarket Books, 2017); Revise the Psalm: Work Celebrating the Writings of Gwendolyn Brooks w/Sandra Jackson-Opoku (Curbside Splendor, 2017); A Gift from Greensboro (Penny Candy Books, 2016); The BreakBeat Poets: New American Poetry in the Age of Hip Hop w/Kevin Coval and Nate Marshall (Haymarket Books, 2015) and The Walmart Republic w/ Christopher Stewart (Mongrel Empire Press, 2014).

Poet Tiffany Midge is the author of Bury My Heart at Chuck E. Cheese’s, (Nebraska UP, 2019), a collection of life, politics, and identity as a Native woman in today’s America. Other books include Guiding the Stars to Their Campfire, Driving the Salmon to Their Beds (Gazoobi Tales); the full-length poetry collection Outlaws, Renegades and Saints: Diary of a Mixed-Up Halfbreed (Greenfield Review Press, 1996), winner of the Diane Decorah Memorial Poetry Award; the collection, The Woman Who Married a Bear (The University of New Mexico Press, 2016), winner of the Kenyon Review Earthworks Prize for Indigenous Poetry; and the children's book Animal Lore and Legend: Buffalo (Scholastic, 1995). Midge's work has appeared in North American Review, World Literature Today, The Raven Chronicles, Florida Review, South Dakota Review, Shenandoah, Poetry Northwest and the online journals No Tell Motel and Drunken Boat. She earned an MFA from the University of Idaho, and an enrolled member of the Standing Rock Sioux Reservation. She is of Hunkpapa Sioux and German ancestry, and grew up in the Pacific Northwest, where she lives now.

Octavio Quintanilla is the author of the poetry collection, If I Go Missing (Slough Press, 2014) and the 2018-2020 Poet Laureate of San Antonio, TX. His poetry, fiction, translations, and photography have appeared, or are forthcoming, in journals such as Salamander, RHINO, Alaska Quarterly Review, Pilgrimage, Green Mountains Review, Southwestern American Literature, The Texas Observer, Existere: A Journal of Art & Literature, and elsewhere. Reviews of his work can be found at CutBank Literary Journal, Concho River Review, San Antonio Express-News, American Microreviews & Interviews, Southwestern American Literature, Pleiades, and others. You can check out his Frontextos (visual poems) in Gold Wake Live, Newfound, Chachalaca Review, Chair Poetry Evenings, Red Wedge, The Museum of Americana, About Place Journal, The American Journal of Poetry, The Windward Review, Tapestry, and Twisted Vine Literary Arts Journal. His visual work has been exhibited at Presa House Gallery, AllState Almaguer art space in Mission, TX, the Weslaco Museum, Our Lady of the Lake University, El Centro Cultural Hispano de San Marcos, and at the Emma S. Barrientos Mexican American Cultural Center / Black Box Theater. An exhibit of work is forthcoming at The Southwest School of Art in San Antonio, TX. He holds a Ph.D. from the University of North Texas and is the regional editor for Texas Books in Review and poetry editor for The Journal of Latina Critical Feminism. Octavio teaches Literature and Creative Writing in the M.A./M.F.A. program at Our Lady of the Lake University in San Antonio, Texas. Check out his website: octavioquintanilla.com or find him on Instagram @writeroctavioquintanilla & Twitter @OctQuintanilla

Posted by Steve Benton at 10:33 AM No comments:

From Ken Hada, Director
on behalf of ECU Colleagues
October 10, 2020

With sadness I am announcing that we will not be hosting an on-campus live event April 2021.

Multiple reasons converge to make this cancellation for 2021 necessary. The overarching concern is for the health of everyone involved. Connected to this concern, even if a vaccine were available, and/or things are much better by April, much of the planning for the annual festival occurs during the months of September through February. As things stand now, it is simply impossible to plan for an uncertain future event. I’m sure you can appreciate the challenges involved were we to plan a live event, then have to undo it, if the virus situation is not under control (as was the case last year). Scissortail Festival is about bringing people together. We (and many of you) have worked hard to bring folks to the festival on an annual basis. Given that people from multiple cities and towns across the nation attend the festival, we simply have no satisfactory way of regulating who attends and how many would potentially be available in session rooms. I’m sure you can appreciate the potential chaos of people intending to attend, then not showing up for their reserved seat, and others arriving only to be told that safe capacity has been reached, etc. Moreover, such an approach goes against the coming together attitude that makes our festival what it is.

Further, considerable construction is occurring in the places where we normally hold our readings, and there is absolutely no guarantee that the construction will be finished by April. All of these factors, combining with uncertain attendance of students, along with an overworked faculty trying to adjust to online teaching and departmental chores, while maintaining safety and personal concerns for their families, make it wise to cancel for 2021.

I encourage all of us to enthusiastically support the live-streams of our six, selected authors who are scheduled to present at 4 and 6pm, April 1-3, 2021. Beyond their stellar abilities, we need to keep the first weekend of April vibrant with the Scissortail vibe! Please join us for live-streams and/or reposts. We are also scheduling a reading by ECU students. Please support them as well (Saturday, April 3 at 2pm). Further details will be announced, but please save those dates! Thank you.

Also, please note: The Darryl Fisher High School Contest is occurring (see posting). We will not conduct an undergraduate contest for 2021.

Finally, we are committed to returning live with our traditional format in April 2022. That is the hope of all involved, both for our festival, and more important, for the health of our societies.

Peace,
Ken Hada
Posted by Steve Benton at 11:01 AM No comments:

Guidelines:
* All Oklahoma high school students (9th - 12th grade) are eligible.
* Poetry (up to 100 lines) or Short Fiction (up to 6,000 words) is acceptable.
* Limit 5 poems and 1 short fiction piece per student.
* All entries must be the original work of the student.
* All entries must be neatly typed; please double-space fiction entries.
* Entries will not be returned, so keep your originals.
* No identifying marks should be on the manuscript itself, except for the title.
* Provide cover page with contact information: 1) Student’s name; 2) Student’s Mailing Address 3) Teacher’s name 4) Classification (senior, junior, etc.) 5) Phone number, Email and student’s mailing address. (No work submitted without a mailing address for each student cannot be judged)
* Work may be submitted through conventional mail or email.

DEADLINE: Conventional mail must be postmarked on or before Friday, February 5, 2021. Email entries must be sent by 11:59 p.m. on February 5, 2021. There will be no exceptions. Winners will be notified and awards will be mailed to students during the month of April 2021. The names of winning writers will be posted online at: www.ecuscissortail.blogspot.com.

Posted by Steve Benton at 11:22 PM No comments: