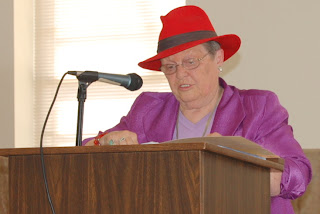 Dorothy Alexander is a publisher, storyteller, and author of four collections of poetry: The Dust Bowl Revisited, Borrowed Dust, Rough Drafts, and Lessons From an Oklahoma Girlhood, a collection of art and poetry. She also writes non-fiction stories and essays, has edited two collections of oral history about her home community in western Oklahoma, and is the facilitator of the poetry readings at the annual Woody Guthrie Folk Festival in Okemah, Oklahoma. Publication of her memoir about the illness and death of her son is scheduled for late 2012. In a previous life, she was an attorney and municipal judge for thirty-seven years.

Timothy Bradford is the author of the introduction to Sadhus (Cuerpos Pintados, 2003), a photography book on the ascetics of South Asia. In 2005, he received the Koret Foundation’s Young Writer on Jewish Themes Award for his novel-in-progress based on the history of the Vélodrome d’Hiver, and he was a writer-in-residence and visiting lecturer at Stanford University. From 2007 to 2009, he was a guest researcher at the Institut d’Histoire du Temps Présent in Paris. His poetry has appeared in numerous journals including 42opus, Bombay Gin, CrossConnect, DIAGRAM, Drunken Boat, ecopoetics, H_NGM_N, Mudlark, No Tell Motel, Poems & Plays, and Upstairs at Duroc, and his first collection, Nomads with Samsonite, was published by BlazeVOX [books] in 2011. Currently, he is a Postdoctoral Fellow at the University of Tulsa and lives with his wife, two sons, and an ever-changing menagerie just outside of Oklahoma City.
Rayshell Clapper is an Associate Professor of English at Seminole State College in Seminole, Oklahoma where she teaches Fiction Writing, American Lit, Native American Lit, Introduction to Lit, and Composition classes. She has completed a Master’s of Arts in Creative Writing and a Master’s of Education in English Education. She has presented her original fiction and non-fiction at several conferences and events including: Southwest/Texas Pop Culture Association/American Culture Association Regional Conferences, Pop Culture Association/American Culture Association National Conferences, Sips Open Mic Night, and Howlers and Yawpers Creativity Symposium. Her publications include Red Dirt Anthology, Originals, and Oklahoma English Journal. She currently has a handful of pieces out for consideration. Beyond her written works, she successfully created a writer's group in rural Oklahoma to support burgeoning writers.

J. Don Cook, Oklahoma City, is a writer, photographer and artist whose latest book, Shooting from the Hip, a collection of photographs and essays published by the OU Press, will very soon be awarded a Wrangler from the National Western Heritage Museum for best photography book of 2011. Cook has been nominated three times for a Pulitzer Prize and won Oklahoma Photographer of the Year seven times. His art and photographs are housed in major collections around the country. An alum of East Central University, Cook is working on a book about creativity.

Andrew Geyer’s latest novel is Dixie Fish (Ink Brush Press 2011). His other books are Siren Songs from the Heart of Austin (Ink Brush Press 2010); Meeting the Dead (University of New Mexico Press 2007); and Whispers in Dust and Bone (Texas Tech University Press 2003), which won the silver medal for short fiction in the Foreword Magazine Book of the Year Awards and the Spur Award from the Western Writers of America. Geyer's work has appeared in Texas Review, South Dakota Review, Southwestern American Literature, descant, and many other literary magazines and anthologies, and has been nominated for the Pushcart Prize. He was recently named Featured Fiction Fellow for the 2010 Batchelor Emerging Writers Series at Barton College. He currently serves as Assistant Professor of English at the University of South Carolina at Aiken.

In the past, Bayard Godsave’s work has appeared in the Cream City Review, Confrontation, Another Chicago Magazine, Florida Review, Bryant Literary Review, Cimarron Review and the Evansville Review, among other places. One of the stories, “00:02:36:58,” which originally appeared in Carolina Quarterly in 2005, was included in 2006 in Flash Fiction Forward, an anthology of short short fiction published by WW Norton, and was anthologized again this past year in a collection called Upside Down B, which is an English textbook used in secondary schools in Sweden. In 2001 he received an MFA from Minnesota State University, Moorhead; in 2008 he received his PhD in English from the University of Wisconsin-Milwaukee; and currently Bayard is an Assistant Professor of English at Cameron University.

Carol Hamilton is a former Poet Laureate of Oklahoma and has been nominated for a Pushcart Prize five times. She has won a Southwest Book Award, an Oklahoma Book Award, Cherubim Award, Chiron Review Chapbook Award, David Ray Poetry Prize, the Byline Literary Awards for both short story and poetry, and the Warren Keith Poetry Prize. She is a former elementary school teacher, college and university professor, and currently translates at a clinic for women and children and for medical teams to Latino countries. She has nine grandchildren and six great-grandchildren. She received a Distinguished Alumni Award from the University of Central Oklahoma in 2007. She has published 16 books of poetry, children's novels and legends. She has recent and upcoming works in Poet Lore, South Carolina Review, Cold Mountain Review, Tulane Review, Slipstream, Texas Poetry Calendar, Southwest American Literature, Tar River Review, San Pedro River Review, California Quarterly, Poem, Flint Hills Review, Main Street Rag, Willow Review, Aurorean, Cape Rock, and others.

Jennifer Kidney is a freelance scholar and author of six books of poetry: Field Encounters, Endangered Species, Animal Magnetism, Women Who Sleep with the Dogs, Life List, and Road Work Ahead. She has twice been nominated for Oklahoma Poet Laureate—by the Oklahoma Library Association in 2006 and by the Jim Lucas-Checotah Public Library in 2008, when she was one of three finalists for the distinction. She has a B.A. with Highest Honors in English from Oberlin College and a M.Phil. and Ph.D. in English from Yale University and more than twenty years of university level teaching experience. She has also worked as a technical writer, poet-in-the-schools, and arts administrator. Kidney has won awards for her poetry, technical writing, and brownie baking. She lives in Norman where she tends her quarter acre and its birds and other creatures and keeps house for her three cats and her dog Lizzie.

Chuck Ladd has successfully taught English in public schools in Southern Oklahoma and Northern Texas for over thirty years while also serving as adjunct professor at Southeastern Oklahoma State University for twenty-three years. He has also published a number of poetic works in a variety of journals and literary periodicals, but has dedicated himself to the advancement of Howard Starks’ poetry. Howard Starks was born in 1929 in Shidler, Oklahoma. He served in the U.S. Army before earning a degree in English Education from East Central Oklahoma State University. He was all-but-dissertation Ph.D in English at the University of Oklahoma where he taught as a graduate assistant before teaching at the University of Nevada in Reno and the University of Colorado in Boulder. In 1968, he became a professor of English and Humanities at Southeastern Oklahoma State University where he served until his retirement in 1995. In retirement Starks finally found time to collect and work on his poetry, mainly at the behest of fellow professors Elbert and Marion Hill and Dennis and Billie Letts. At Southeastern in Durant, Oklahoma, Tracy Letts , the son of Billie and Dennis began to view Howard as a mentor and would take the title of his Pulitzer Prize winning play August: Osage County directly from the title of one of Howard's poems. Starks only published book was Family Album (A Collection of Poetry) in 1996 and became a finalist in the 1997 Oklahoma Book Awards. A New York Times best-selling novelist, a Pulitzer Prize winning playwright, a number of prize-winning poets, a nationally acclaimed western artist, a number of actors from stage and screen, several other novelists all praise his work and consider him a friend and mentor. Howard Starks died in Durant, Oklahoma April 7th, 2003.

Melissa Morphew is the recent winner of a Sacramento Poetry Center Press Book Award for her fifth collection Bluster. Her work has appeared in such journals as Crab Orchard Review, The Georgia Review, Shenandoah, and Prairie Schooner. She is a native Tennessean transplanted to Texas where she teaches creative writing at Sam Houston State University.

Juan Manuel Perez, a Mexican-American poet from La Pryor, Texas, is the author of Another Menudo Sunday (2007), O' Dark Heaven: A Response To Suzette Haden Elgin's Definition Of Horror (2009), WUI: Written Under The Influence Of Trinidad Sanchez, Jr. (2011), and six other poetry chapbooks. Juan is also the 2011-2012 Poet Laureate for the San Antonio Poets Association.

Shaun Perkins is a teacher, storyteller, and poet whose work has been published in The Phoenix, Slipstream, Midland Review, Touchstone, and other journals. She is the state liaison and webmaster for Oklahoma’s state storytelling organization Territory Tellers. She has been a teacher of the year and currently teaches at Oaks Mission High School. Her degrees are in English from Oklahoma State University and in Liberal Studies from the University of Oklahoma. She has presented writing, literature, and storytelling workshops at the National Storytelling Convention, the National Association for Poetry Therapy, the Popular Culture Convention, the Spirit of Oklahoma Storytelling Festival, the Story Circle Network Conference, and more. She lives in Locust Grove, where she is currently working as curator for the Rural Oklahoma Museum of Poetry (ROMPoetry.com).

Jim Spurr received his undergraduate degree from Oklahoma Baptist University. He is an honorably discharged veteran, a retired insurance adjustor and husband to Aline. In addition to running the popular Thursday night open mic in Shawnee, Oklahoma, his poetry has been published in Main Street Rag, Iconoclat, Poetry Depth Quarterly, Clark Street Review, California Quarterly, Rattle, Nerve Cowboy, Broomweed Journal, Sugar Mule, Blood and Thunder, and Red River Review. His poems were anthologized in Aint Nobody that can Sing Like Me, and his Open Mike/Thursday Night was a 2008 finalist for the Oklahoma book award.
Jonathan Stalling is an Associate Professor of English Literature at the University of Oklahoma specializing in American and Transpacific Poetry and Poetics. Stalling is the author of Poetics of Emptiness (Fordham, 2010) and a co-editor of The Chinese Written Character as a Medium for Poetry, A Critical Edition (Fordham, 2008). He is the author of two books of poetry, Grotto Heaven (Chax, 2010) and Yíngēlìshī (Counterpath, 2011). A translator, Stalling has published translations of works by Shi Zhi and Bei Dao, and Li Yu and is the translator of a collection of poetry entitled, Winter Sun: The Poetry of Shi Zhi 1966-2007 (University of Oklahoma Press, 2011). His opera, Yíngēlìshī debuted on the campus of Yunnan University in 2010 which can be watched at his webpage:http://jonathanstalling.com. Stalling is the co-founder and editor of Chinese Literature Today magazine (CLT) http://www.ou.edu/clt, and the editor of the CLT Book Series (at the University of Oklahoma Press), the founder and Director of the Mark Allen Everett Poetry Reading Series at OU, and the Deputy Director of the Center for the Study of China’s Literature Abroad at Beijing Normal University.

Ron Wallace has four volumes of poetry, all published by TJMF Publishing of Clarksville, Indiana: Native Son (American Poems from the Heart of Oklahoma), a finalist in the 2007 Oklahoma Book Awards, Smoke and Stone (The Voices of Gettysburg) and I Come from Cowboys… and Indians, the winner of the 2009 Oklahoma Writer's Federation Best Book of Poetry Award. His latest book is Oklahoma Cantos. Ron is a native Oklahoman whose Scots/Irish roots are woven securely into his Choctaw, Cherokee, Osage lineage. He is currently an adjunct faculty member of Southeastern Oklahoma State University. His work has been published in numerous magazines and anthologies such as: Oklahoma Today, Sugar Mule, Crosstimbers, Encore, NFSPS Prize Poems, Grandmother Earth XIV, di-verse-city 2011, Walt's Corner in The Long Islander, The Enigmatist and Travelin' Music (A Poetic Tribute to Woody Guthrie).
Posted by Steve Benton at 11:59 AM