(Updated March 11, 2011): The annual Scissortail Creative Writing Festival is back for its sixth year and bigger than ever with four featured authors, including Where The Heart Is author Billie Letts. In addition, more than 50 regional, published and emerging authors will make presentations during the three-day festival, March 31 – April 2, on the campus of East Central University in Ada, Okla. All sessions are free and open to the public.

Billie Letts is scheduled to speak at 2 p.m. on Saturday, April 2, in the Estep Multimedia Center. She has received national and international recognition since starting her first novel at age 54. The award-winning author is a native of Tulsa. She retired as an English professor from Southeastern Oklahoma State University in 1995.

Letts is the author of four screenplays, including the filmed version of Veritas, Prince of Truth, and numerous short stories. Where The Heart Is was her first novel and it reached the coveted No. 1 slot on The New York Times’ paperback bestseller list. It was chosen as a read for Oprah Winfrey’s Book Club, has been published in 14 countries with more than three million copies sold and was made into a movie by 20th Century Fox in 2000.

Her other novels are Honk And Holler Opening Soon, Shoot The Moon and Made In The USA.

Letts won the prestigious Walker Percy Literary Award at the 1994 New Orleans Writers Conference and the Oklahoma Book Award for fiction in 1996 and 1999. Honk and Holler Opening Soon was chosen as the “Oklahoma Reads Oklahoma” book in 2004.

The other three featured authors for the writing festival are Larry D. Thomas, Jonis Agee and Susan Perabo.

Larry D. Thomas was the 2008 Texas Poet Laureate. Born and reared in West Texas, Thomas has lived in Houston since 1967. He graduated from the University of Houston with a bachelor’s degree in English literature.

He started writing poetry seriously in the early 1970s during his four-year tour of duty in the U.S. Navy. Immediately after his discharge, he was hired by the Harris County Adult Probation Department where he rose from the rank of probation officer to unit supervisor and ultimately to branch director, the position he held until his retirement in 1998.

Thomas wrote consistently on weekends during his 31-year career in social service and adult criminal justice and was quite successful during that time in placing his poems in numerous respected national literary journals. His first collection of poetry, The Lighthouse Keeper, was published by Timberline Press in late 2000 and was selected by the Small Press Review as a “pick-of-the-issue” (May/June 2001). He has since then published 15 additional collections of poems which have received several prestigious prizes and awards.

Jonis Agee was born in Omaha, Neb. and grew up in Nebraska and Missouri, places where many of her stories and novels are set. She is the author of 13 books, including five novels, five collections of short fiction and two books of poetry. 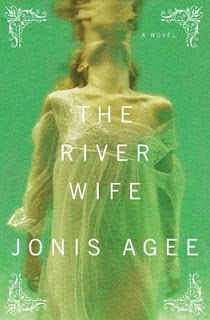 In her newest novel, The River Wife, five generations of women experience love and heartbreak, passion and deceit against the backdrop of the 19th century south. The book has been selected by the Book of the Month Club, the Literary Guild and the Quality Paperback Book Club. 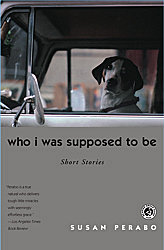 Susan Perabo is a writer in residence and associate professor of English at Dickinson College in Carlisle, Pa. Her short fiction has appeared in magazines such as Glimmer Train, Story, Tri-Quarterly and The Missouri Review and in the anthologies Best American Short Stories and New Stories from the South. Perabo’s short story collection, Who I Was Supposed to Be, was published in 1999, and named Book of the Year by the Los Angeles Times and The Miami Herald. Her first novel, The Broken Places, was published in 2001. A new collection of short stories is forthcoming. Perabo holds an MFA from the University of Arkansas.

The Scissortail Creative Writing Festival runs from 9 a.m. to 8 p.m. on Thursday and Friday, and from 8 a.m. to 1 p.m. on Saturday. Each day is broken into several sessions. For a complete schedule of readers, visit www.ecuscissortail.blogspot.com. 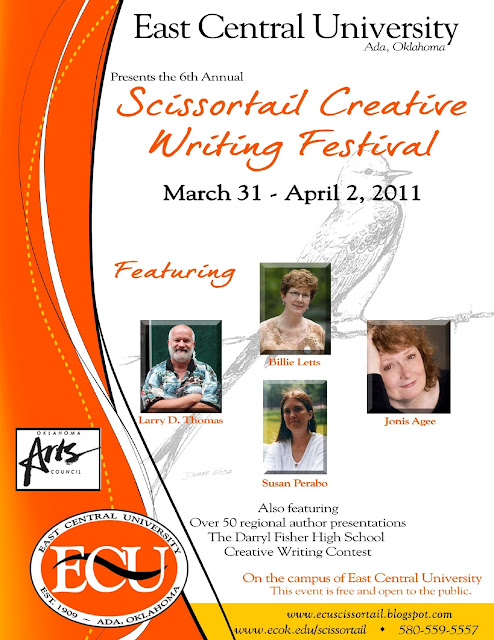